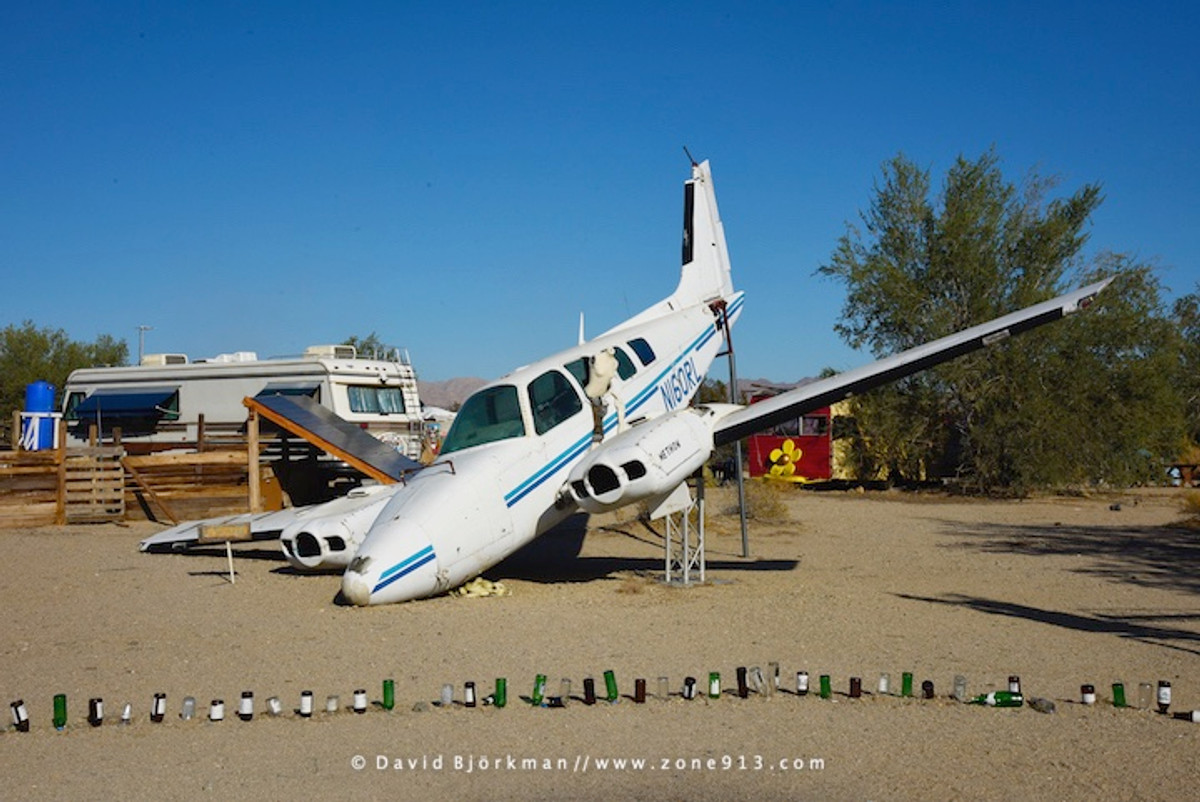 We're back in Slab City (The Last Free Place), and it has changed dramatically. Our last visit was in May, before the summer heat, when the population — ever fluid — was thinning. Now, in October, the snowbirds are arriving, and ironically, it's beginning to look like suburban sprawl, here of all places. 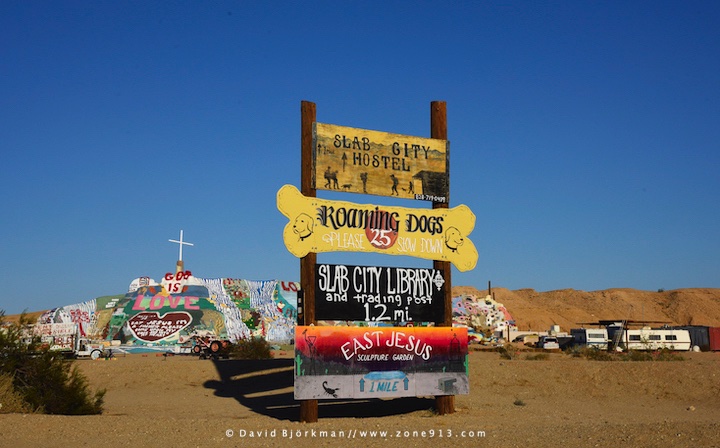 There are numerous RVs and trailers parked out in the desert before we even reach the Salvation Mountain signs, while others are camped alongside the road leading into Slab City. I see one resident sweeping an actual concrete slab as we turn towards East Jesus. (There is no religious connotation in the name – it's a colloquialism for somewhere in the middle of nowhere.)

Upon arrival, we're greeted by a sculpture of a crashed airplane, arrested at a 30 degree downward angle, with arms, legs and a headless mannequin hanging out of a window. It's the first of many works we encounter that seem to be channeling the live-wire energy, possibly from the nearby fault lines, that surges through this place. Outlaws dwell here. 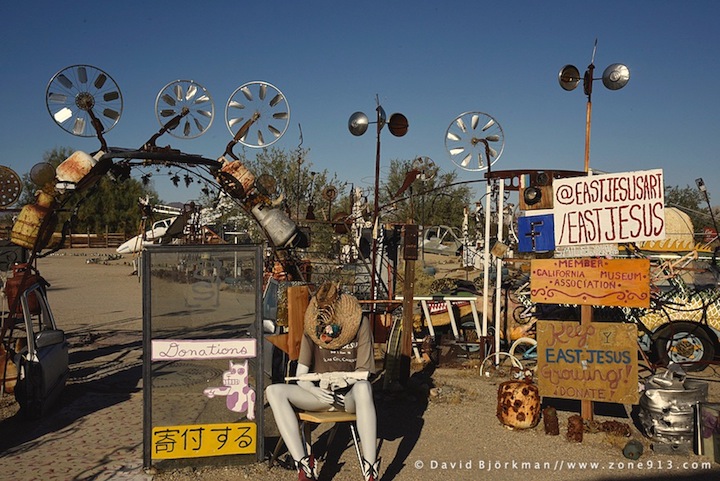 East Jesus is certainly somewhere in the middle of nowhere. It has been described as "an experimental, habitable, extensible artwork since 2006 begun by the late Charles Stephen Russell. The inhabitants of East Jesus and offsite members provide a refuge for artists, musicians, survivalists, writers, scientists, and laymen. They are dedicated to providing a working model of an improbable improvised community. Completely self-contained and run entirely on solar power, East Jesus attempts to use and recycle every bit of consumable trash. They are unique in the Slabs in that they have Human Manure composting to reduce and improve the impact on the local desert environment." 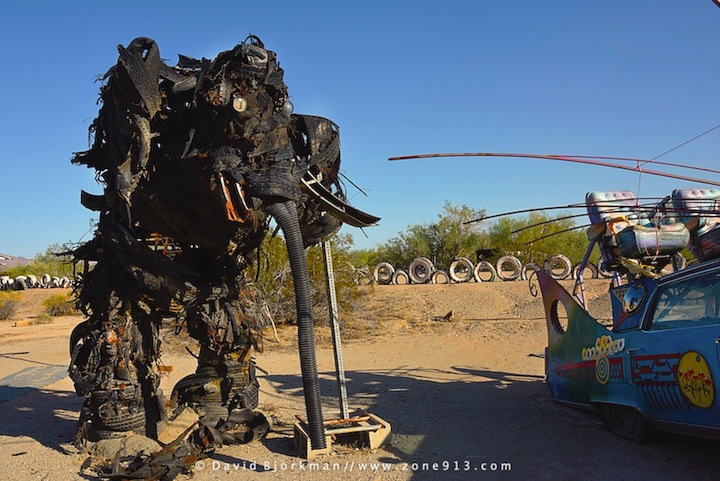 "Welcome to East Jesus." Three mellow dudes and a pitbull greet us as we walk through the entrance into the outdoor sculpture garden. Bursting at the seams, and about to be enlarged, it's filled with: art cars; a 10-foot woolly mammoth made out of discarded tires; a decked-out VW art bus — a shrine to the 'First Church of the Chocolate Martini;' an open three-story tower surrounded by dozens of white duck decoys; a TV Wall of discarded sets, each sporting a Marshall McLuhan inspired message painted on the screen; and other constructions, many involving circuit boards, hoses, painted mannequins and doll parts — all channeling the times like an early Surrealist. 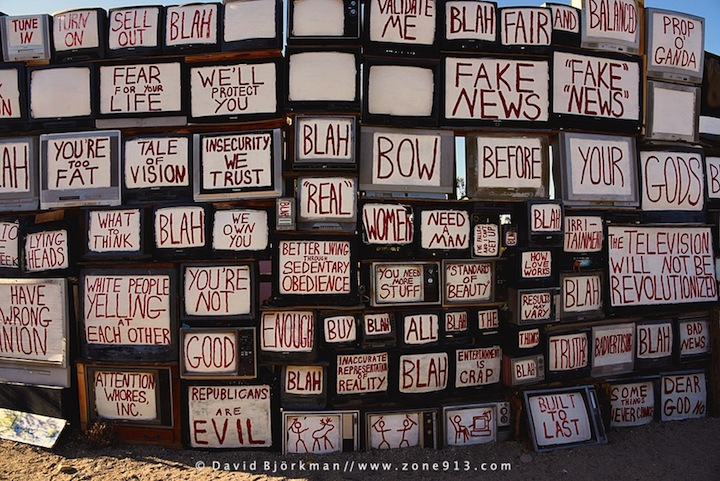 Outlaws dwell here. I keep walking the periphery around these pieces, each time gives me a different perspective, and I begin to see the sub-texts going on. As a photojournalist, I work the edges of my subject matter to get an overview, to identify any patterns, before I enter into the fray. At the edge, the choice of a specific observational perspective is available, I can either remain here, at a distance and use my telephoto, or go gonzo and jump right in with my wide angle. With these works, I can see this same perspective being used. They're working on the edge, with the freedom of not having to please the PC cancel culture, agents, gallery owners, critics, the industry or a long list of others who need pleasing. An added bonus is there are no wealthy donors and patrons to be offended. Freedom! They're outlaws on the frontier, on the periphery in the desert, so I understand the vision. Coincidentally, I'm shooting from the periphery of this installation, which itself is located on the periphery of Slab City, which in turn is located on the periphery of civilization. That's a lot of peripheries, and while I'm shooting, that current of live-wire energy keeps surging through me. Yowzo! 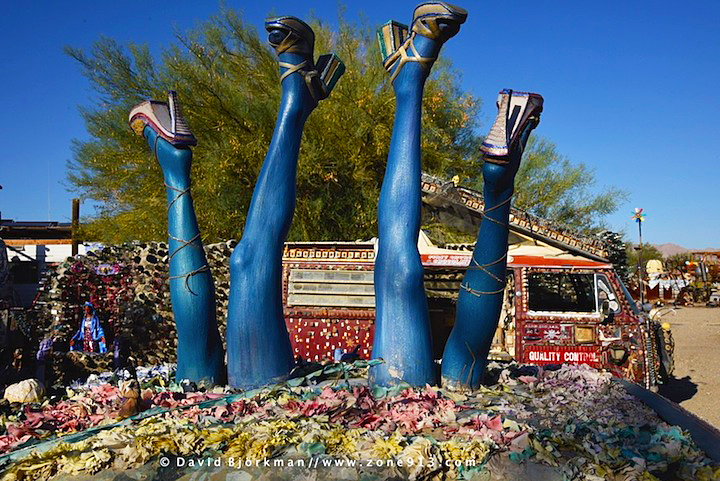 These works are the latest incarnation of a revolution that started when I was a painter in graduate school. The art world we inhabited then (late 60s and early 70s) was experiencing the same kind of turmoil erupting in the outside world. Our painterly, ivory-tower walls began to crumble when in NYC, Minimalist sculptor, the late Donald Judd, officially proclaimed to the world that the rectangular canvas was no longer adequate for contemporary expression. (OMG are we now obsolete?) So, many painters, myself included, then switched to working on shaped canvases. But we had missed the point. What this proclamation really meant was: now you were free to choose any space (indoors or outdoors), and any 'non-traditional' art medium (leather, latex, felt, fat, steel, fur, bone, yarn, string, wire or even dirt — the Italian Art Povera) to create your work. The metaphorical restraints of the rectangular canvas and the four walls of the gallery had been lifted and became irrelevant. The gates were blown wide open, and during times of liberation, it's hard to comprehend all the possible ramifications. After my studio walls crumbled, I went to live in Greece. 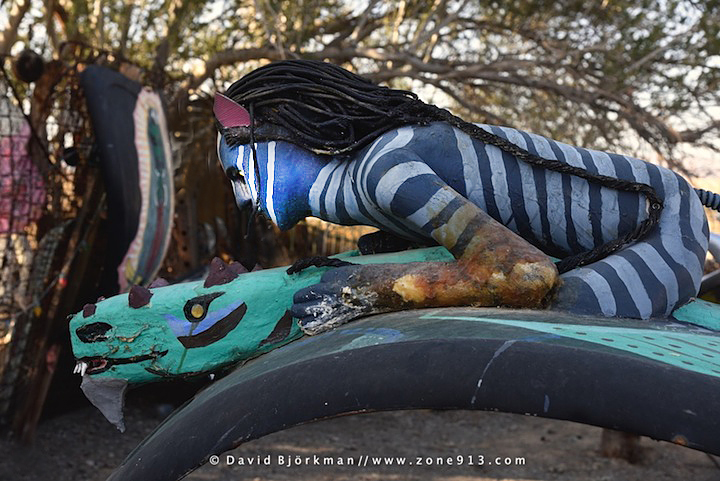 Now, decades later, Donald Judd's proclamation and East Jesus' function have been fused into a mission statement, "an experimental, comprehensive habitat and artwork comprising vernacular architecture, technophilia, common-sense environmentalism, desert survival and sculpture/assemblage using predominantly recycled, re-purposed or discarded materials, sublimating the unwanted and ugly into the purposefully beautiful." To actually back up these words, East Jesus provides a temporary home for artists, allowing them to work on their projects. Somewhere in the middle of nowhere, it's off the grid, with no running water, electricity or sewer system. And few constraints.

Later, when we were leaving, we talked with one of the dudes at the entrance, an artist from LA who had been working here since May. (He mentioned the summer was tolerable, with only one 128 degree day.) He arrived in East Jesus to concentrate fully on his art, to get away from the distractions of the outside world, and he said it was working. We wished him good luck. 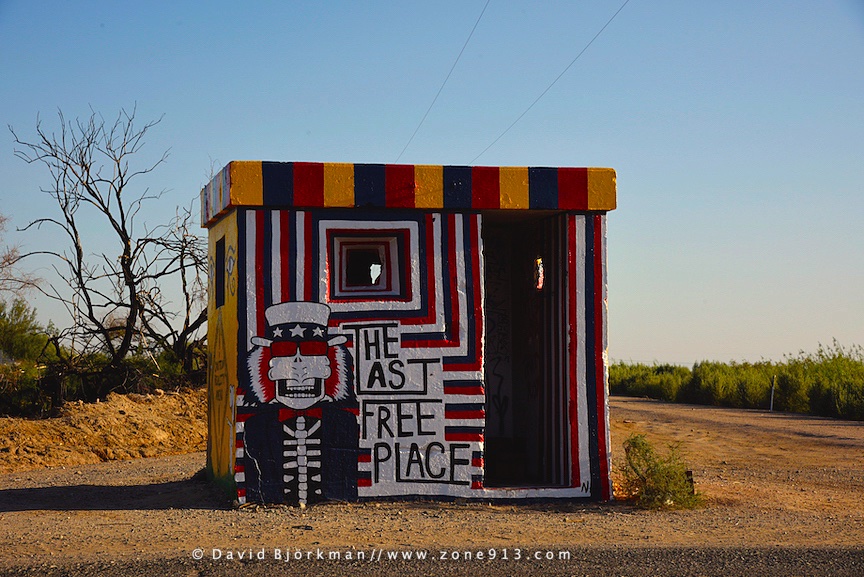 These works, sitting in the desert instead of a gallery, are made by those who create beauty from cast-offs. Some are right-on — they create meaning from the re-purposed discards of a throw-away culture and transform them into new visions. As described in the 'Desert Prophecies,' and now taking place in East Jesus, these pieces will now have the freedom to slowly disintegrate under the harsh desert sun, eventually becoming an unrecognizable pile of sand, only to be replaced by newer works and by newer outlaws — hopefully with the same observational wit.