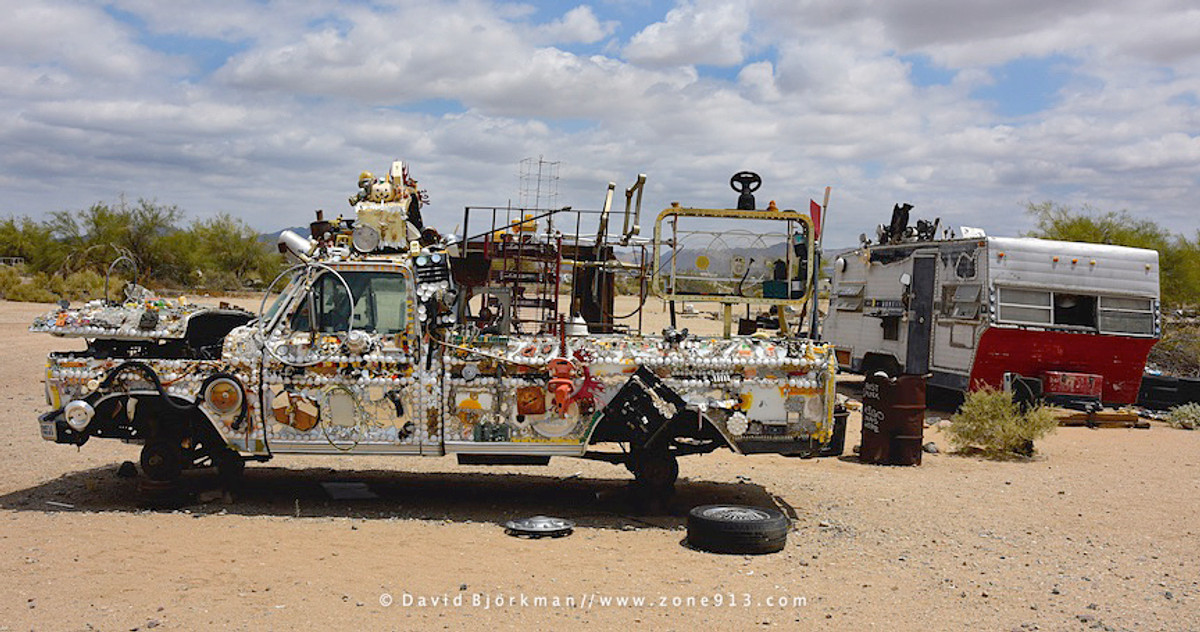 Slab City, located in the Sonoran Desert between Palm Springs and the Mexican border, sits at the edge of civilization. Built as Fort Dunlap Marine training base during WWII, probably because of its isolation, the base was eventually decommissioned, and all that remained was the concrete slabs of its barracks' foundations. Canadian snowbirds seeing an opportunity for free winter living, drove down and parked their RVs on the slabs. It became known as Slab City, and soon artists, poets, retirees, musicians, misfits, squatters, and people wanting to escape the grid, and possibly the law, started living there in trailers and RVs year round. 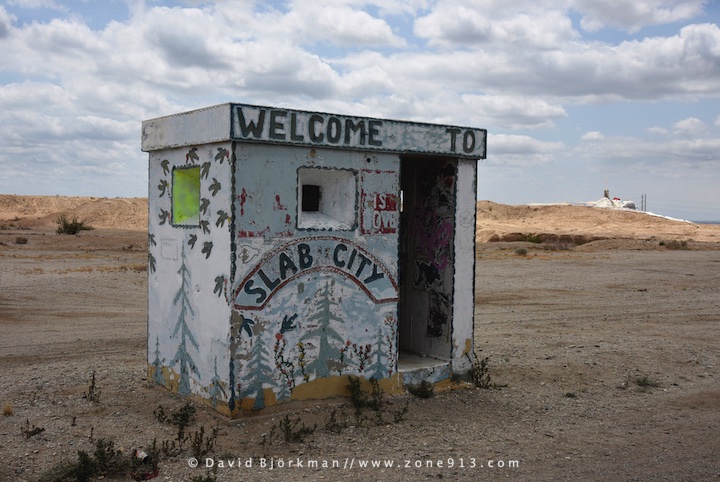 Slab City has the ambience of a wild west outpost in the desert where the temperature in the summer can easily reach 120 degrees. There are no amenities such as water and electricity, so the 'Slabbers' run their lights and refrigerators with generators or solar panels powered by unlimited sun. Water comes in on trucks from a commercial firm. Food is purchased in nearby Niland, or Brawley, 15 miles away. Besides being adjacent to multiple earthquake clusters, the impromptu city is five miles east of the Salton Sea, and downwind of storms blowing dust from the evaporating seawater full of chemicals. When it rains, the desert floor turns to goo the consistency of molasses. It has the feeling of being in Mad Max territory. It has been called a "de facto enclave of anarchy." 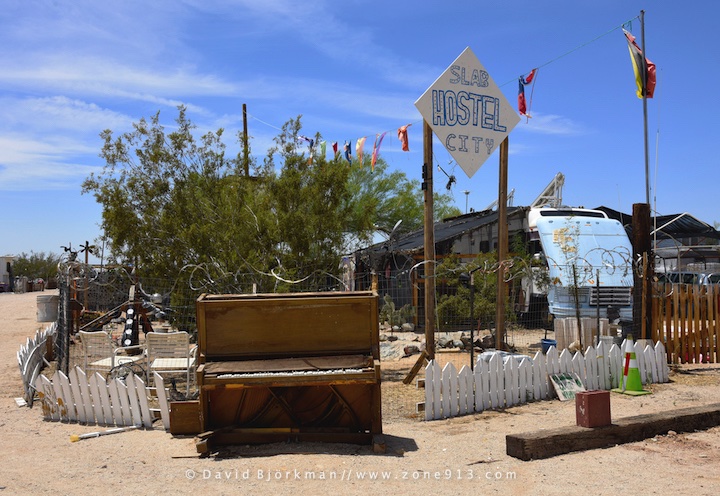 I spend one afternoon talking with Blue Hair, a woman who is showing me around the Slab City Hostel. She explains that there are different Slab City "neighborhoods" of people who share certain interests: artists, Lutherans, retirees, meth heads, eccentrics, bikers and survivalists. Some live here to stretch their government benefits, others because they don't fit in anywhere else. 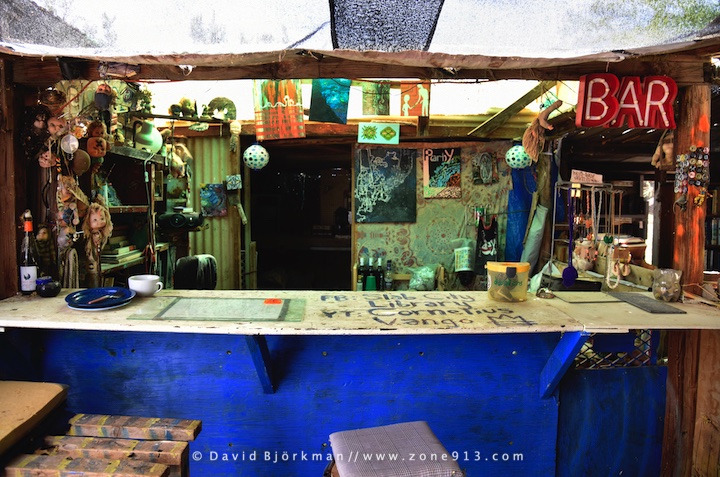 To serve the needs of the community, there's a faded baby-blue church trailer and a library that's open 24 hours and features a bar. One area, East Jesus, is an experimental, sustainable and habitable art installation, full of creative types who live inside their art.

Each community is responsible for governing its members. If someone can't live and act responsibly within some very loose boundaries, after repeated warnings, their RV is set on fire. I later see a couple piles of charred rubble. On Saturday nights, the communities come together for food and entertainment, gathering near an open-air stage with bleachers and a gaggle of old couches. An eclectic talent show is guaranteed. 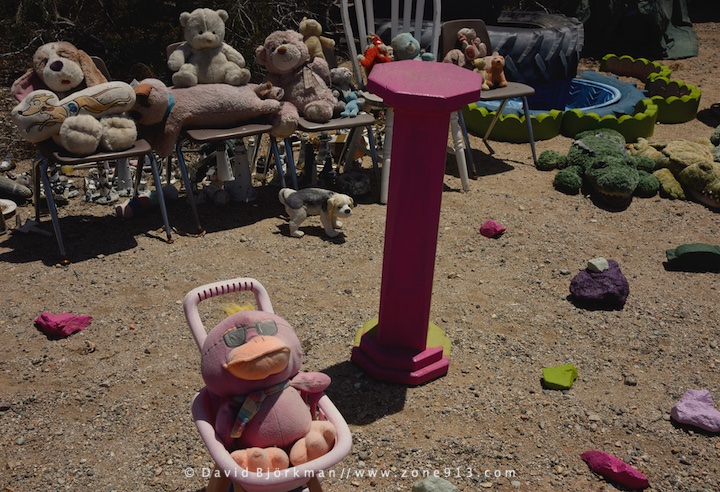 Across the dirt road from the Hostel, I notice a sign for the Slab City Home for Abandoned Teddy Bears. It began when someone discarded a Teddy Bear on the ground. (Who in their right mind abandons a Teddy Bear?) Soon, more bears appeared, making — let's call him Smokey — believe he was in the center of a Teddy Bear vortex. He decided to take them all in and treat them with the love they deserve because Teddy Bears have been comforting children around the world for over a hundred years. The bears now hang out together in relative, but hot, comfort, some sitting in chairs gossiping, while others lounge in the shade of the RV. The bears have become a Slab City attraction, with outsiders driving by to take their photo — before speeding off. 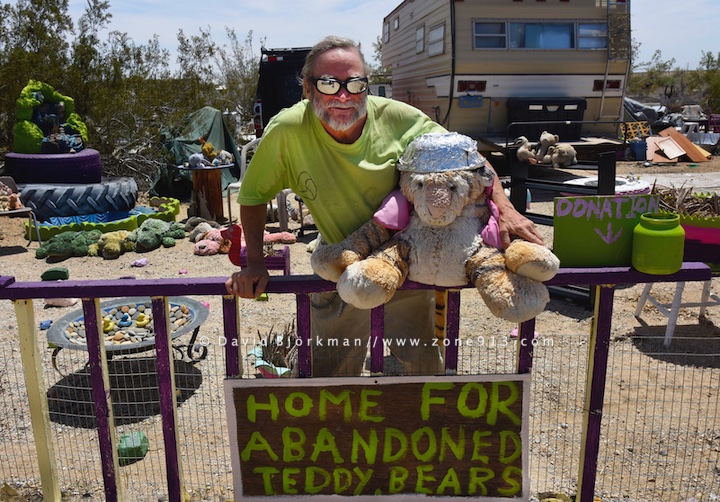 Smokey does have favorites among the bears, and here he holds one of them. At one point, he realized it was costing him too much to live in a Teddy Bear vortex, what with caring for and feeding the adoptees, so he painted signs in lime green and bright purple to officially announce his Slab City "Home For Abandoned Teddy Bears." Sitting beside the signs is a lime green jar asking for donations. The Teddy Bears now have a home, and hey, it worked for the Cabbage Patch Kids.