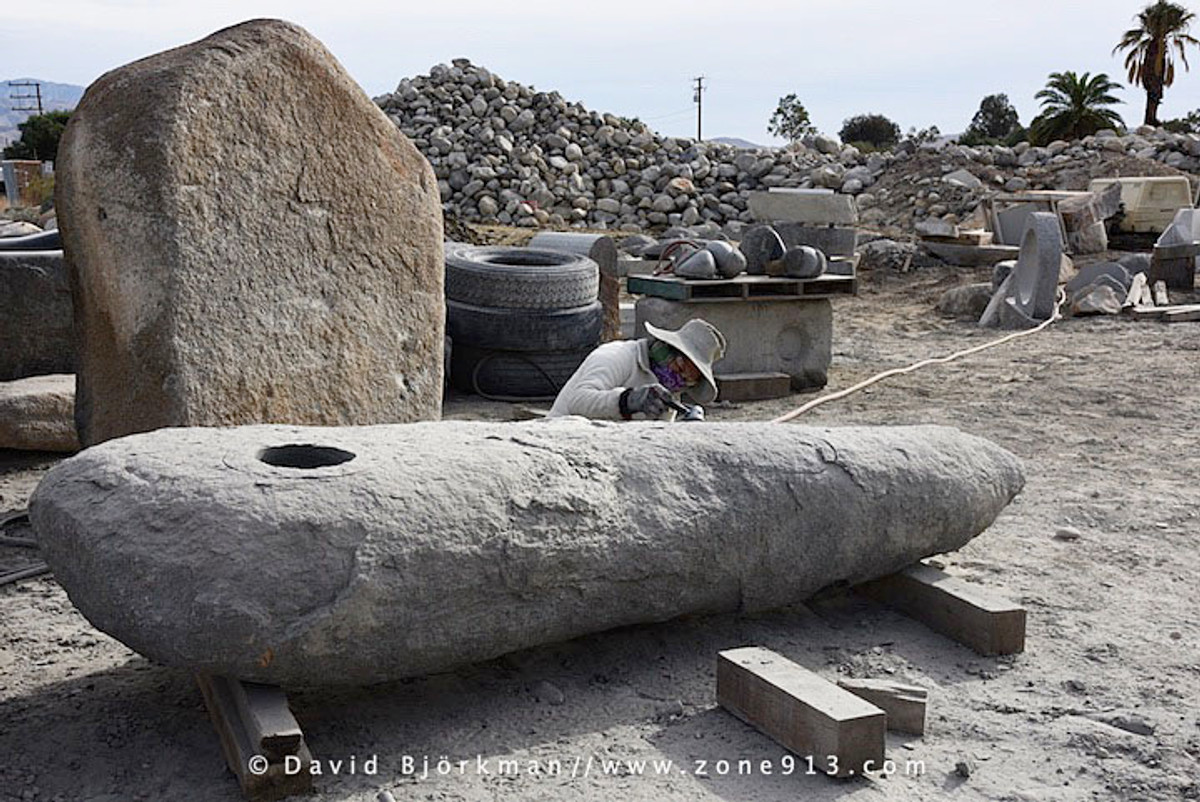 The rock artist’s outdoor studio is an otherworldly arena of huge boulders sculpted with curves, negative space, polished polka dots and radical shapes. Alien figures and faces stand guard inside the chain-linked perimeter. At the entrance on the day we arrive is a 25,000-pound piece of black granite, sculpted by the rock artist for a Los Angeles rock band to take on tour to London and beyond. Farther back on the lot, a woman, Alicia, squats indefinitely beside a multi-ton black granite “gabbros” boulder, shaping it with a grinder. As the grinder picks up speed, its whir rises to that of a high-pitched banshee, while the stone emits a low groan of resistance. The throaty low throb of an air compressor underscores it all. This is the choir in the sculpture yard. 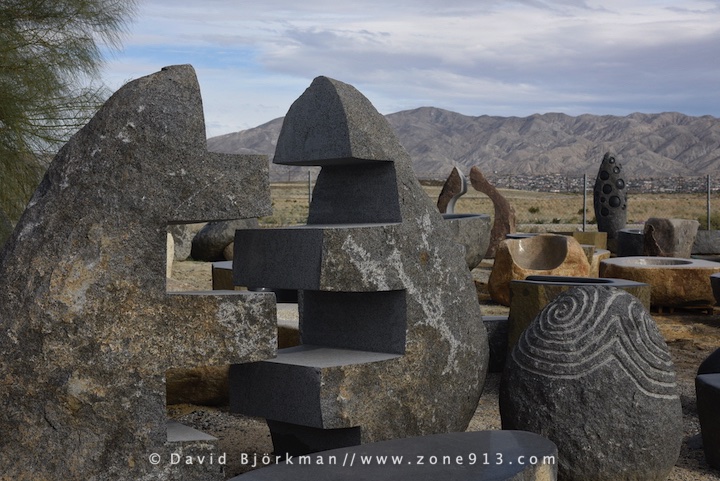 Here on the flat desert terrain of north Palm Springs, the open-air studio is ringed by stark mountains, pink in the morning, mauve at sunset. The sky is a blue bowl stretching from peak to peak, the high contrails of aircraft turned to tattered lace by the ever-present winds. It’s here that stunningly large black granite boulders are transformed into grand garden bowls and bathtubs. Hot tubs and fountains. Firepits. Shiny, black polished “eggs.” Granite thrones and chaise longues for one person or two. This is boulder art. All done by hand. 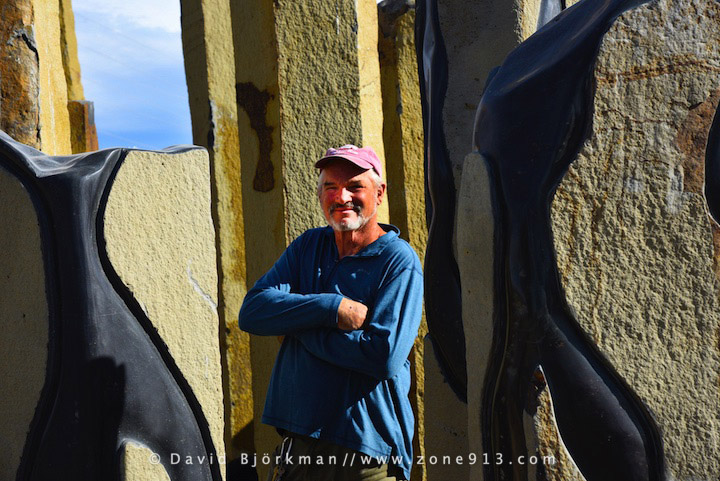 “Everyone has a talent,” says the rock artist stone sculptor Roger Hopkins. “Mine is picking stones.”

He came to Palm Springs in 1999, and began making sculptures from granite boulders — local stone created some 300 million years ago. The big, roundish behemoths look like Nature intended them for sculpture.

“You just can’t find a rounded stone like a natural granite boulder,” he adds.

A Vietnam veteran, Roger has a degree in ornamental horticulture, and in the early 1970s wielded a rake and shovel in his landscaping business. Then the diamond saw blade became available.

He was working on landscape projects for new-build homes. The final construction was often late and falling farther behind “because of the architects and contractors.” Roger, being the landscaper, was by necessity the last to finish and became the scapegoat for the delay.

But at one job, armed with a diamond blade, he cut along the edge of the bluestone patio, and it went so neatly and easily that he cut a small granite boulder into a garden vase for the homeowner.

“It made him so happy, he took his checkbook out and wrote a check,” he says. “Ka-ching! That was it!”

Granite boulders must have begun appearing in his dreams that night.

Roger appeared on the This Old House television program from 1985 to 1999, creating granite stairs and other stone work. He became a resource for several documentaries, and appeared in Nova and Discovery channel productions, and the Series 1, Episode 1 of Ancient Aliens, which surmised how the ancients set about moving stone. In Egypt, he worked on creating a replica model of the Great Pyramid, and erecting an obelisk.

“I loved the adventure of doing it,” he says. “I’ve worked on four continents.” 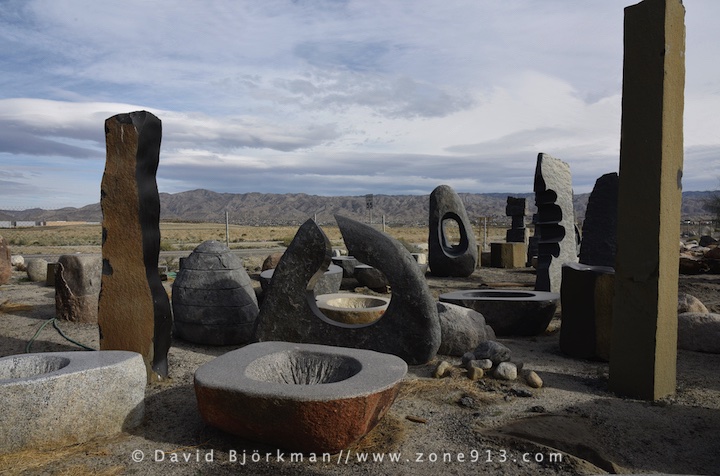 He calls his sculptural style "primitive modern," and ancient influences can be seen in his works. Washing-machine-sized rocks incised with concentric swirls similar to those made by Neolithic man. Huge boulders sculpted to have an opening in the center. Easter Island looking faces. Large stones sculpted to resemble the omphalos, the revered navel of creation. A forest of tall, narrow basalt columns —  standing stones for making one’s own henge.

More than 80 percent of Roger’s rock art is bespoke. His website is www.rockartist.org He once worked a 71 ton granite boulder for a Palm Springs resident, moving it being a logistical feat. On the studio lot, smallish polished black granite boulders the size of a piglet run $400, a basalt face with alien-looking features $2500. Boulders drilled for (gas) firepits to use inside the house or out start at $2500, and are one of his most popular works.

He has shipped two containers of sculptures to Chengdu, China, including six firepit tables made from black granite boulders at the behest of the architect Narendra Patel.

His favorite work at this time is his “family” of five sculptures, three finished, two in process, sculpted from ancient granite boulders originating near Kingman, Arizona. His inspiration is the Terracotta Army discovered in the tomb of China's first Emperor in the Lintong District, Xi'an, People's Republic of China.

“These are my praetorian guard,” he says. 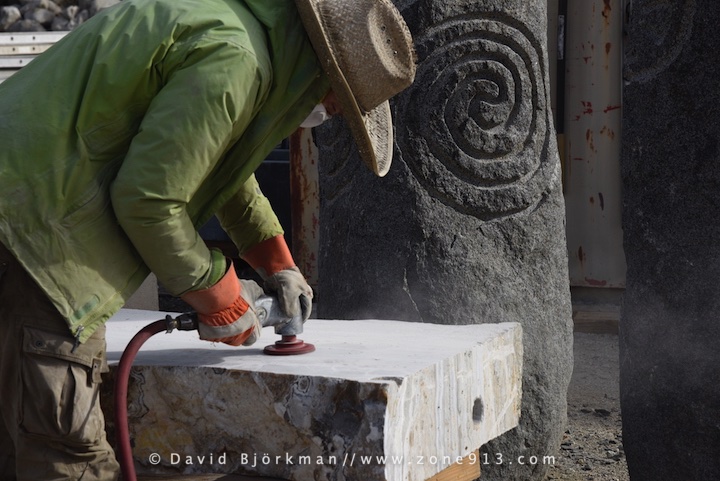 As the fiery sun relentlessly beats like a torch, Roger’s son Jacob slowly, evenly, repeatedly, patiently passes a polisher across the surface of a slab of creamy-white onyx, the tech on rock warbling its voice into the studio's curtain of sound. Jacob will eventually take over the business, Roger being 72. But stone never forgets, and Roger's designs will last for millennia.

People love rocks!, which makes it hard to pick a favorite from among the many sculptures. Remember the pet rock phenomenon? Now, on vacation, everyone takes home from the beach or the desert a rock to remember the experience. A rock and a selfie.

“There’s this primordial attraction to rocks,” Roger says. “We all came from rocks. If not for the components in rocks, we couldn’t be here. Rocks mean strength and security. We all try to get some of those qualities from the stone.”

His love for his work, and its matrix, beams from his face. I wonder how Southwest Airlines would feel about me bringing a piglet-size polished stone in my carry-on.