It's dark when I start driving from Boulder, Colorado, up the canyon on my way to Trail Ridge Road in Rocky Mountain National Park. I'm off to photograph the top of the world. It's hard to see the hungry elk that sometime graze along the side of the road, with their dull-colored coats blending into the background. Driving around blind corners, I slow down enough to carefully scan both sides. Sometimes the elk are there. This becomes a dance, and my cautionary dance steps take more time than anticipated, so I arrive in Estes Park right after sunrise. 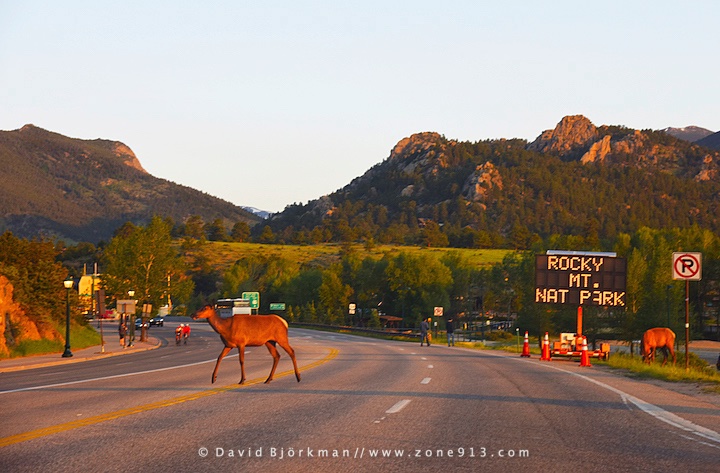 Even in the town, it's critical to drive carefully because the elk walking around is part of the ambience. These Estes Park elk are fat and sassy compared to their cousins 4,000 feet further up the mountain on Trail Ridge Road. In fact, these Estes Park elk have gotten so savvy, it's rumored they have developed an ElkPay App that automatically charges tourists to take their photo.

I bypass Estes, and drive into the park, entering the idyllic Horseshoe Park area, a wide, picturesque valley complete with a stream flowing through it, that ends in a background of majestic snow-covered mountains. Imagine a classic Hollywood mountain backdrop—it's right here. Or, in a different reality, I just stepped into an Albert Bierstadt painting. Going around the west end of this Shangri-La, I begin the steady climb on a road that will be soon carved out of the side of a mountain.

At 9,000 feet, I leave the lower Montane ecosystem, and enter the Subalpine ecosystem. Here, the snow that blows down from the alpine region creates a wet, 30-inch-per-year precipitation zone, resulting in miles of ram-rod straight Engelmann spruce trees, some reaching a height of over 100 ft. Now, I'm driving on a narrow corridor through pungent-smelling, towering dark-green trees, while on the uphill side of the road, multiple waterfalls of gurgling snow melt are rushing downhill. This sound of music won't last much longer because my world is about to change. 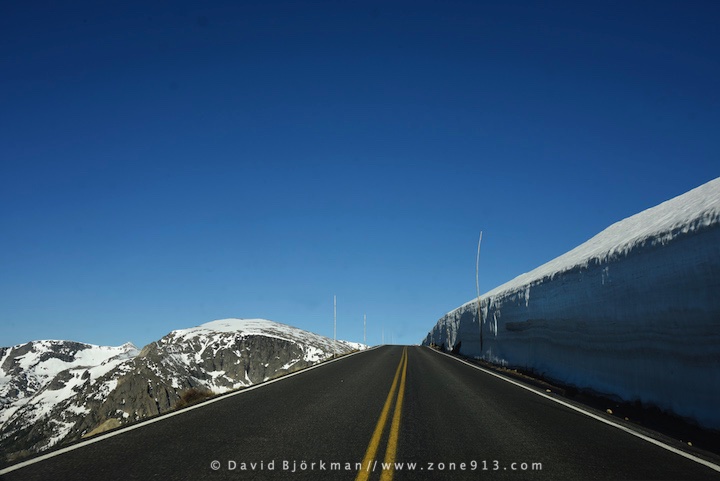 At 11,400 feet, I enter the Alpine ecosystem past the treeline, and a new, stark reality. Since trees no longer mask my view, I notice the edge drops off the side of the road a thousand feet into the valley far below. Then, as I drive over the top part of another area, both sides drop off. I like to watch vacationers driving this road for the first time. Seeing the drop, they subconsciously start veering toward the middle of the road, trying to get as far as possible from the edge, sometimes ending up halfway in the incoming lane.

I reach the top of the world. Welcome to Trail Ridge Road. 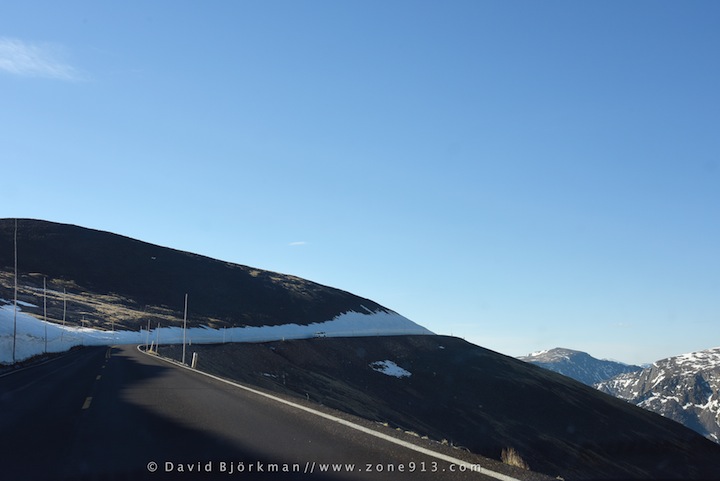 During the day, this time of year, the unfiltered alpine sun melts the snow, which then flows across the road in certain areas. At night, the water freezes, so I watch out for black ice on the road, especially in areas with no guard rails. One year, two college students were driving over Trail Ridge early one morning when, it's believed, their car skidded on black ice, sliding over the edge. The wreckage was finally discovered a couple weeks later, resting in the trees hundreds of feet below. 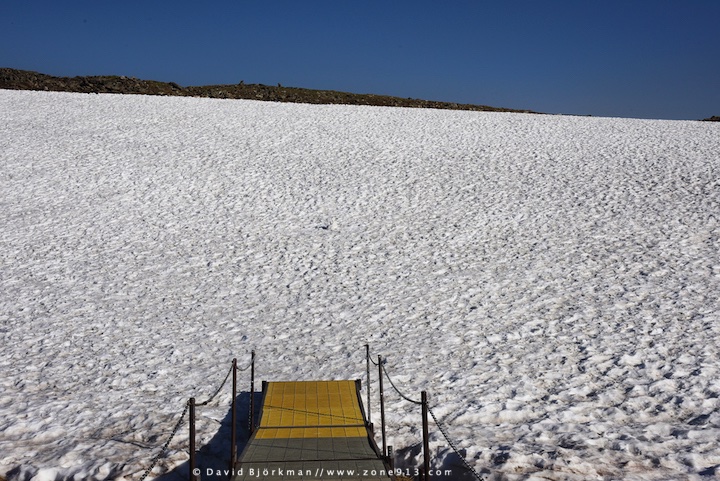 I park the car. Although it's the middle of June, the early morning air is cold. The wind is vicious, so I quickly put on my many clothing layers before they all blow away. I'm the only person up here, with no extraneous noise except for the roar of the wind. I begin to shoot this massive snowfield, a canvas that both the wind and the sun take turns sculpting each day, transforming it into a lake of frozen waves at night. As the summer progresses, the snowfield will slowly recede up the hill. 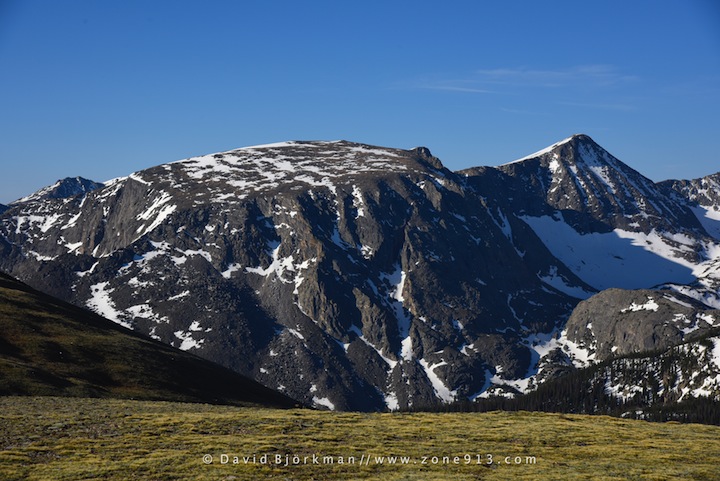 Each year, after Trail Ridge Road opens around Memorial Day, Victoria and I traditionally trek the Ute Trail, which is believed to have been used by native people, for over 6,000 years, to cross the Continental Divide. After parking at the Alpine Visitor's Center, just under 12,000 feet in elevation, we start walking, and are alone on the trail within minutes. There is a feeling of liberation in walking the tundra. The high-altitude air is thin, dry and clear, filled with the moist smell of melting snow. The sun is strong, and is engaged in its seasonal battle with the snow. Most years, the sun wins easily and the snow melts away, but occasionally, the snow perseveres with patches of it surviving through the summer. The ever present winds are cold and robust—a calm day is rare. The world is visible for a full 360 degrees. Being up here becomes a cleansing, the scrubbing away of major cooties, before a proper attitude (altitude) adjustment is installed. It's peaceful, but this calm is not to be taken for granted, as there's always the chance a storm could quickly blow over with lightning, rain, sleet or snow—nature putting things in their proper perspective. (To celebrate the 2019 Summer Solstice, it snowed on Trail Ridge, resulting in drifts up to five feet, forcing the park service to close the road).

More than one person has described the feeling of walking up here as, "Being closer to God." I can't argue with that.

This year, because of heavy April and May snows, it took the park service an additional ten days to clear Trail Ridge Road. We attempted our annual Memorial Day trek, but the usually accessible trail became impassible almost from the beginning. We had to traverse four snowfields before we could even reach the first official one—which last year had already melted by this time. In many places, the trail was completely buried, and if we miscalculated its location by even a foot or two, we could sink up to our thighs in the wet snow. This happened to Victoria, and it took us close to a half hour to dig her leg out with hands and a snow pole. We decided it was time to head back. We'll return another day.

UPDATE: We've been back to Trail Ridge three more times since I posted this story. The four smaller snowfields are gone. The first major snowfield is still 20 to 30 yards wide. Further on, the second major snowfield has receded up past the Ute Trail, so we did't have to transverse through it. It's hard to imagine that last year both of these snowfields were completely melted by June 10th, a month earlier than this year's cycle. The wind is howling and the weather is changing, so it's time to get off the mountain.

Next week, Victoria tells how the snow held her captive.